Our Victorian Twelfth Night event on January 5 is nearly here, and it’s time to give further introduction to our evening’s performers. Valentine Wolfe will perform music from their latest album and a few crowd favorites, while Tally Johnson will share Christmas ghost stories.

Besides the end-of-the-night festivities we will have Victorian parlor games, food, wine, wassail, and a Twelfth Night cake. The time is almost here… grab your tickets now. Seating is limited. 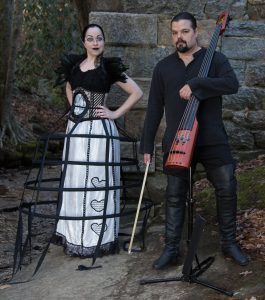 Formed in 2006, Valentine Wolfe is the combined effort of Sarah Black and Braxton Ballew. Imagine Sarah Brightman being backed by Francois Rabbath blowing through a Marshall stack at midnight.  Having dubbed their music “Victorian Chamber metal”, the duo have synthesized a love of metal, classical and industrial, infusing them with a Victorian sensibility that evokes the likes of Bram Stoker and Edgar Allan Poe.

The ethereal soprano vocals of Sarah Black–which call to mind not only the aforementioned Brightman, but also Dianne van Giersbergen of Xandria and Tarja Turunen–are buttressed by the thunderous growl of Braxton’s electric upright bass, and the two coalesce over pounding rock and electronic grooves punctuated by a maelstrom of synthesizers, keyboards, samples and sound design.

In addition to their gothic metal stylings, their post-graduate backgrounds in music (Sarah has an MM in Composition, and Braxton a DMA in Double Bass) has afforded them multiple opportunities to broaden their musical horizons in recent years, having been contracted to lend their unique sound to theatre productions; composing and performing the scores for Shakespeare’s The Merchant of Venice, The Tempest (Warehouse Theater), The Winter’s Tale (Furman University), and Twelfth Night (The Distracted Globe), the voice of The Angel in the Warehouse Theater’s production of Angels in America, silent films and short horror films (most notably, Your Cold Black Heart).

Drawing inspiration from all things Victorian, including literature, poetry, and history, and blending them with their musical proclivities and sensibilities and new media (such as Game of Thrones– which they recorded several songs based on the source material–and Penny Dreadful), their music has found particular favor amongst the Steampunk set.

But in a genre dominated by airships and gearwork, tophats and goggles, they follow the back alleys of streets lit with yellowed gaslamps, casting shadows long against the walls; where Jack the Ripper stalked his victims, where Dracula walked with Mina.  Together they’ve provided the drama and the grandeur of the gothic at conventions all up and down the East Coast; rocking con raves with Industrial metal for a pre-industrial age, where the glowsticks are filled with absinthe. 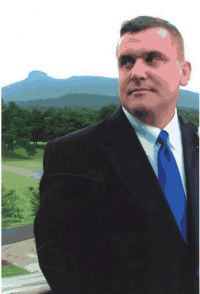 Mr. Johnson is a graduate of Spartanburg Methodist College and Wofford College with degrees in history. He is the author of Ghosts of the South Carolina Upcountry, Ghosts of the South Carolina Midlands, Ghosts of the Pee Dee (all for The History Press) and he also has a story in An Improbable Truth: The Paranormal adventures of Sherlock Holmes (from Mocha Memoirs Press). His newest full-length release is an anthology of Southern Gothic ghost fiction titled Creek Walking from Falstaff Books. He also has stories in two anthologies from Prospective Press. Mr. Johnson was also the recipient of the first Caldwell Sims Award for Excellence in Southern Folklore from the USC-Union Upcountry Literary Festival, where he is a long time presenter.

Mr. Johnson has been active in many community groups, including Chester County First Steps, the Chester County Arts Council, and the Chester Little Theater among others. He is on the Roster of Approved Artists as an author, as well as the South Carolina School Librarians’ list of storytellers. He enjoys spending time with his family and friends, hiking, hammock camping, visiting historic sites, and reading. He has been a guest at ConGregate, ConCarolinas, Fandom Fest, MonsterCon, MystiCon, AtomaCon and Imaginarium. He is also the Storyteller- In-Residence for Palmetto State Hangers, a hammock camping group.